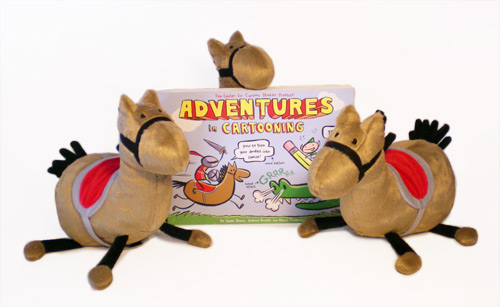 I was recently commissioned to make a plush version of a horse named Edward from the book Adventures in Cartooning by James Sturm,  Andrew Arnold and Alexis Frederick-Frost.  The commission was from James as a gift for the other two authors.  Edward is the gallant steed of the knight, who is the main character of the story.

I really like interpreting very stylized drawings into plush,  it presents some challenges but it's fun to solve those problems.  The biggest one I initially faced turning Edward into a 3D toy was deciding how to treat his eyes since as they are drawn they exist on one side of his face.   Edward also has a substantial rump,  so smoothly creating his overall shape took some time.

Check out the book, it's a great story that just happens to explain the basics of cartooning.  It will make you pick up a pencil and start creating your own comics. Posted by Claire Sanders at 8:32 AM