IRL Battle is a trading card game where you battle against friends using your friends. Each card represents a real person (someone you know) with real likes, dislikes and skills.  The better you know your friends, along with the face value of their card, the better you can argue for them to win the battle. 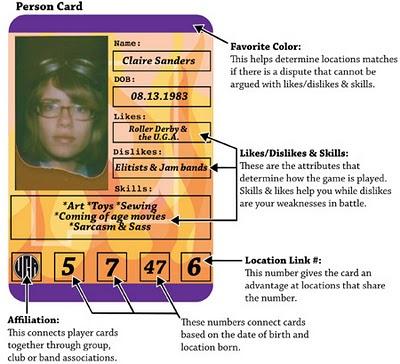 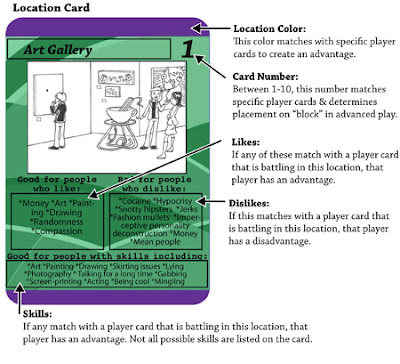 
The game can be played with as little as 2 player cards and 1 location card, but the more the better.
These instructions describe play with about 20 player cards and 10 location cards.
The simplest way to play is similar to the card game War. Separate the people and location decks, deal out the whole deck of people cards between each player. Start a round by flipping over a location card, both players simultaneously flip over a person card. The winner is decided by looking at the card’s likes, dislikes and skills.

If there is a card that has a directly relating dislike then that person automatically loses that round, unless they have a skill that does well in that location. Skills are given first priority and they beat likes.  If it seems like neither card has an advantage then look to see if there is a color match for the top of the cards, then whichever card matches wins that round and they collect both cards. If the colors don’t match then look to see if the last number on the card matches the location number, then that card is the winner.

If nothing matches, another round of people cards is drawn by the two players. With this round you can now use both of the cards drawn on your side in conjunction with each other to double skills. This should give a clear winner, if not continue to throw down cards until a clear winner of the round is established, then the winner takes all the played cards.

The game continues until all the location cards are played or you can play until one player has all the people cards. 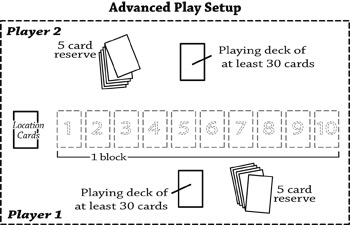 This game is played with each player having at least 30 people cards and 10 locations cards.

The goal of this game is to establish your gang’s turf by winning battles in various locations.

Each player chooses 30 cards from their core deck. Shuffle the location cards deck and place them face down. Out of your deck of 30, choose five cards that you want to keep as a secret arsenal to be pulled out later.
Now the game is ready, pull a location card and place it down facing either player. Each player pulls a random card out of their deck of now 25 cards, or they can play one of their five secret cards. The winner is determined by the same factors as in basic play. As you pull out location cards and winners are given, line up the location cards from 1-10 based on their number, this is establishing a city block. 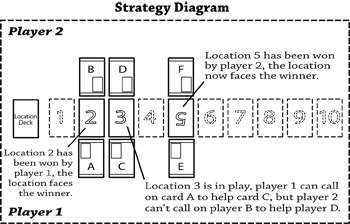