In my new apartment, the front door doesn't make a complete seal at the bottom so there is a bit of a draft that comes through. I had just been putting a towel beneath it, but for Christmas my mom gave me this cool old knitted toys book and it had a snake pattern in it. I thought it would be much cuter to make a snake to guard the the door instead of an old towel.

I followed the pattern from the book Knitted Toys and Dolls by Nellie Burnham but made some changes along the way. For one I kept knitting the body until it was the right length to cover up the door. I also wanted to be able to stick things in my snakes mouth, like some mice so instead of following her instructions for the inside mouth I made a mirror image of the snake head with a little extension in it then sewed the two together. I gave my snake a felt tongue instead of yarn, and two felt fangs. Alec often draws snakes with angry eyebrows, which I think is funny so I gave my snake some angry eyes. This is a great project to use up little scraps of yarn since it all goes together to make the stripes on the snake. 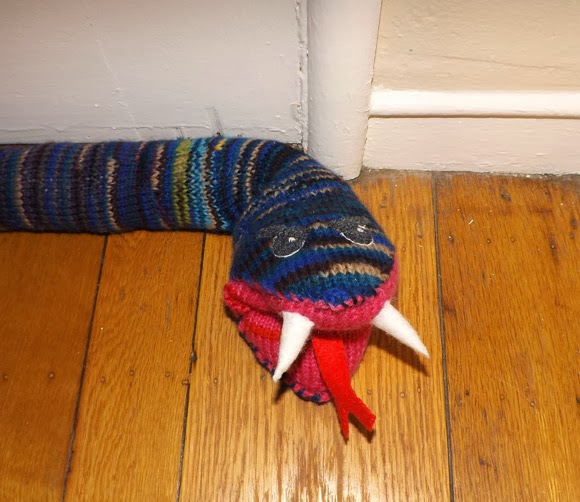 This was also around the same time that Alec and I were thinking about adopting a cat, but we had to wait for approval from our landlord. During that waiting period, I starting crocheting some little mice toys with hopes that our future cat would play with them. 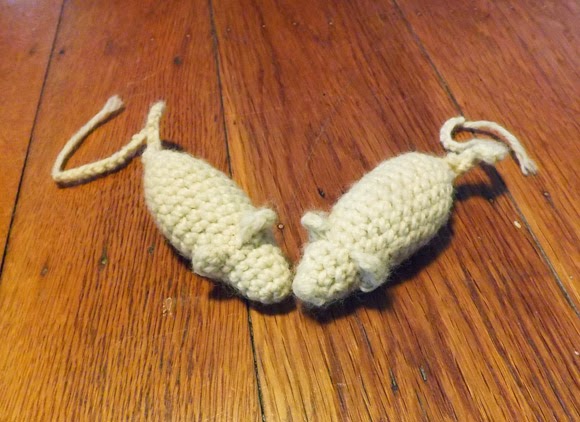 I just made up the pattern for the mice by messing around with yarn. I want to share the pattern but I'm still new to crochet patterns so hopefully I'll get around to it. I used a cream colored acrylic yarn I had, but this is another good project to use up yarn scraps since it doesn't take a lot to make. I didn't put on eyes or whiskers since I figured they would be chewed off. 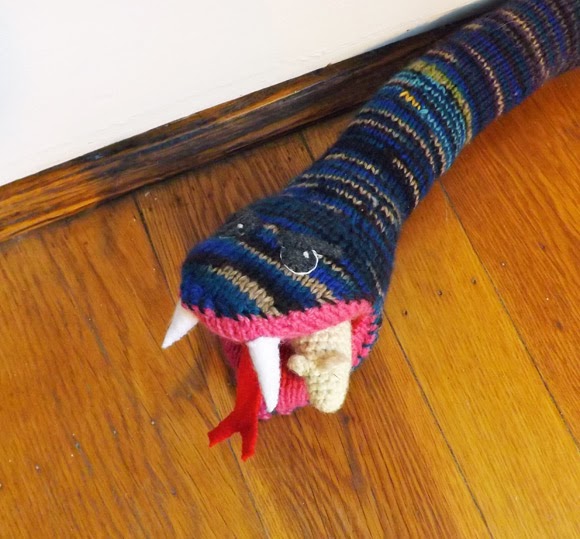 The mice fit perfectly in the door snake's mouth which is cute to me. The good news is that we did get to adopt a cat, his name is Nibs and lucky for me he does like playing with the mice I made.