For Thanksgiving this year Alec and I headed up to Seattle to visit his family. While we were there we looked through some of his boxes in storage to see what he could get rid off. This reminded his mom that she had some old fabric that she wanted me to look through, and here is what I came home with. It's an amazing collection from the '60s to the '80s, leftovers from when she made outfits for her kids. Most of the fabric is in small pieces, but for some prints there is a yard or more. I'm very excited to dream up some projects to put this fabric to good use. 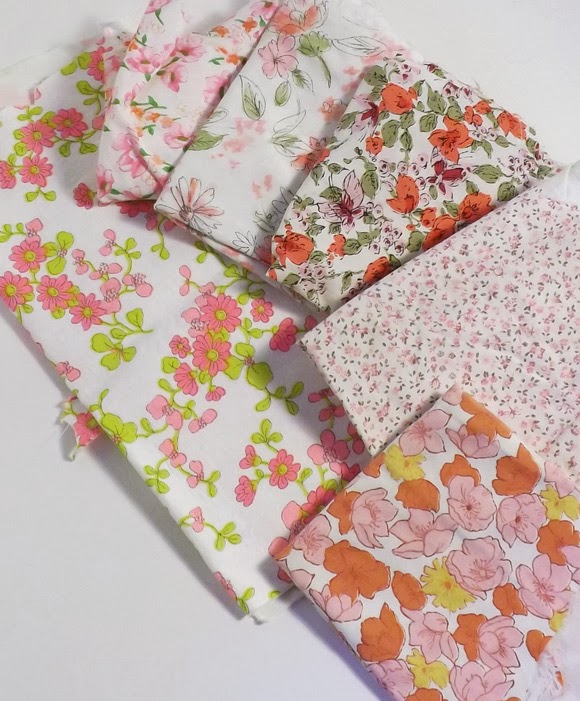 Many of these pieces are from blouses that Breck (Alec's mom) wore as a teen. 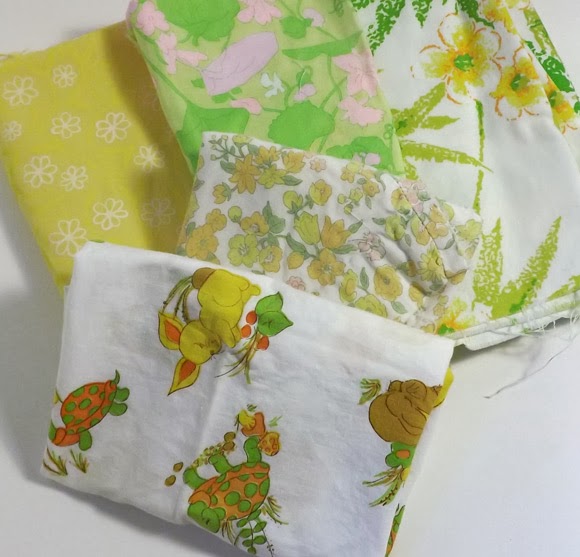 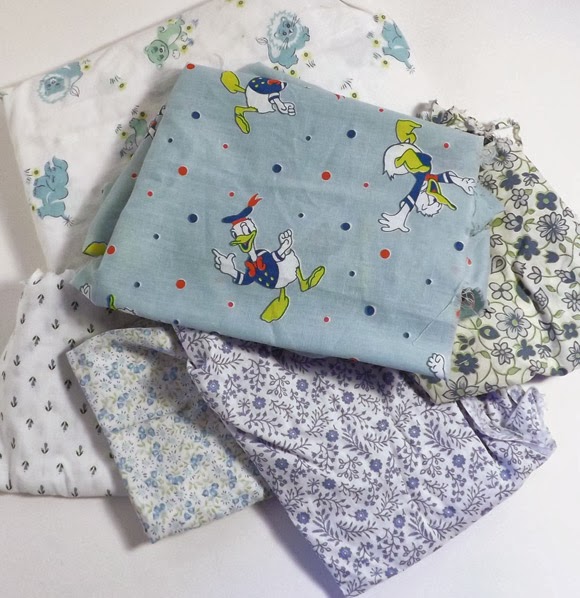 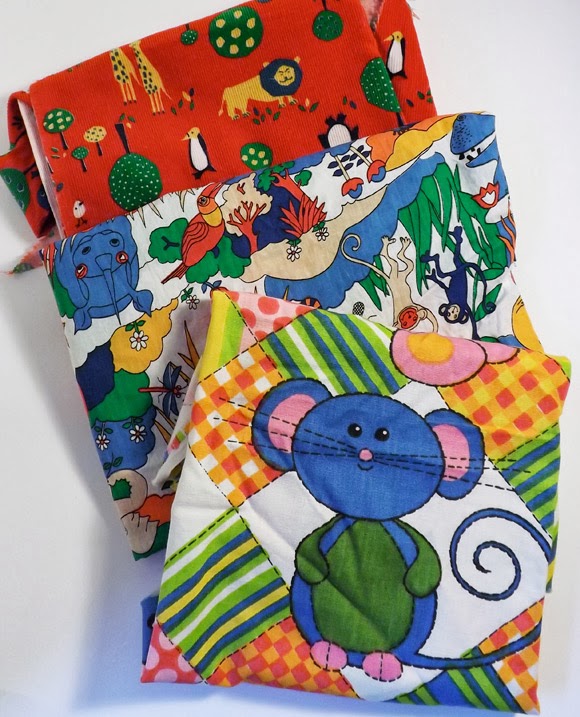 The mouse panel is fabric that Alec remembers from when he was a toddler. I really like the angry lion on the top red corduroy. 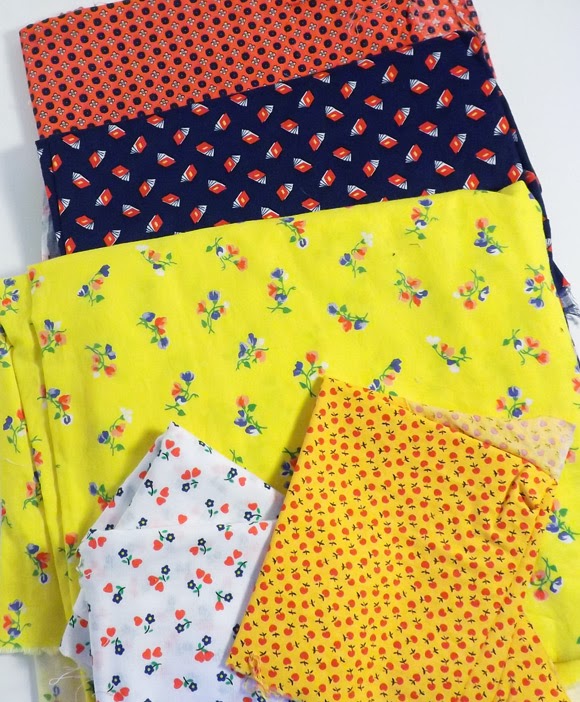 Email ThisBlogThis!Share to TwitterShare to FacebookShare to Pinterest
Labels: Miscellaneous

It doesn't get very cold in the San Francisco Bay area so it's hard to make it feel like Christmastime, at least to me. I usually go home to my parents in New Mexico for the holidays, but this year I'm staying home. On a whim while watching a movie I came up with a use for some light green yarn I had. The yarn has thick nubs in it and it too thick for most of my knitting needles, but I thought I could turn the texture into something neat.

I started by using a light white yarn to crochet the nubby yarn into a more compressed shape. I used all the nubby yarn just in case I want to take the wreath apart in the future. 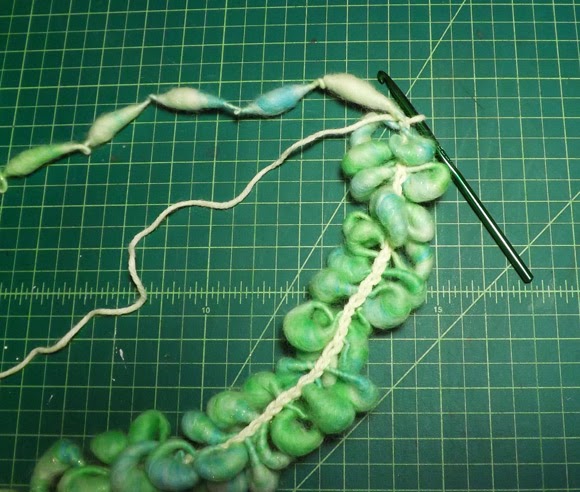 When all the nubby yarn was bunched up I further crocheted it to create the round shape. I was out of wire but I had a bunch of zip ties that I though would help create the round shape, they helped but weren't rigid enough. The crocheting is haphazard as it's on the back and won't be seen. 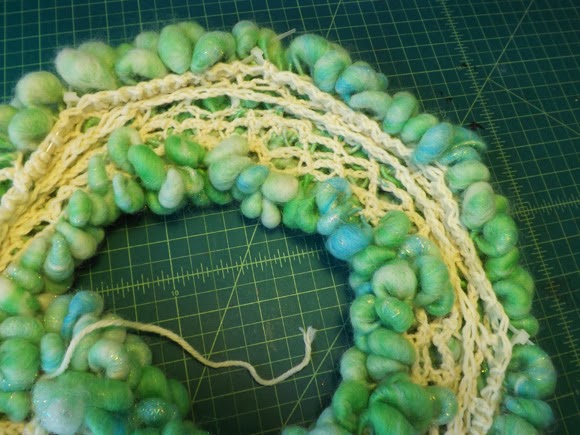 After all the yarn was bunch into a defined circle, I cut out a backing of cardboard and attached it to that to make it rigid. 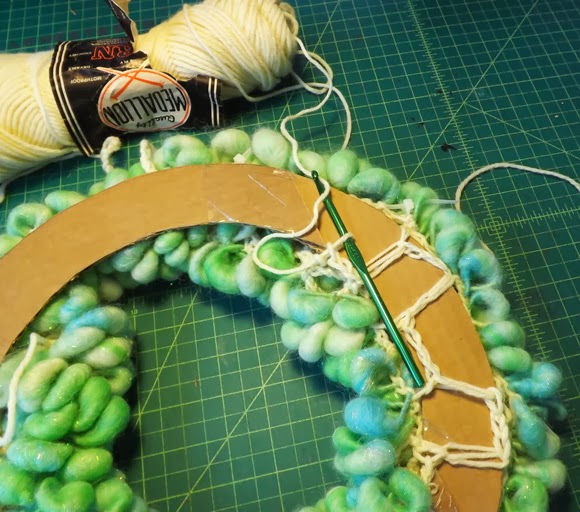 I added a bright red satin bow and hung it on our front door. If you look really close, Logray the Ewok is hiding in the peephole. 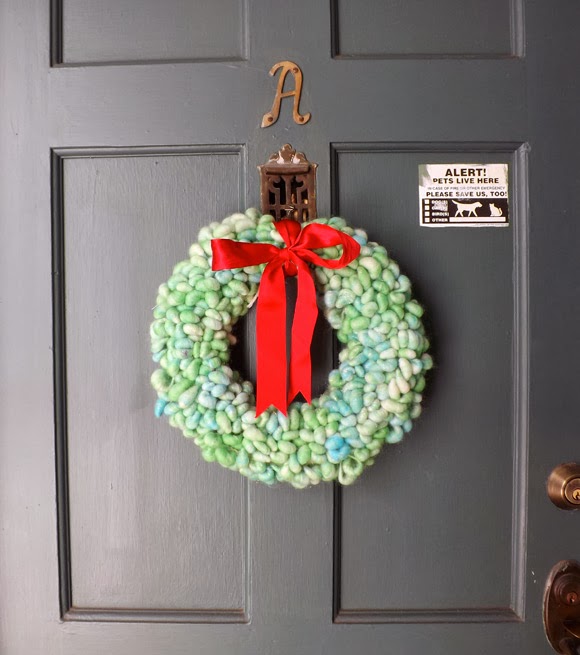 For Alec's birthday this year I made him a pair of Kermit the Frog patterned pajama pants. He already had some pajamas that fit him pretty well, so I used those as the pattern for the new pair. I did add some length and a decorative bias strip at the bottom hem as he is pretty tall. He loves the Muppets so he's pretty stoked on them. 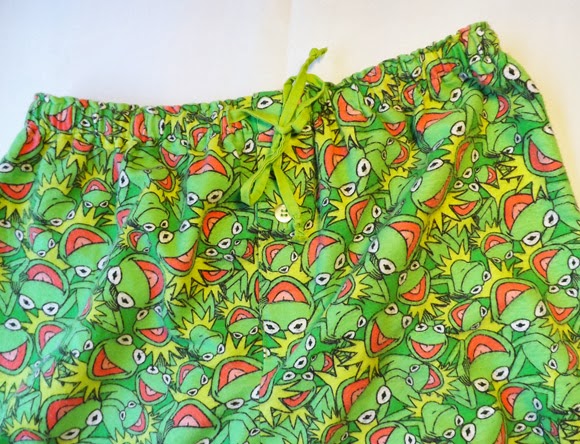 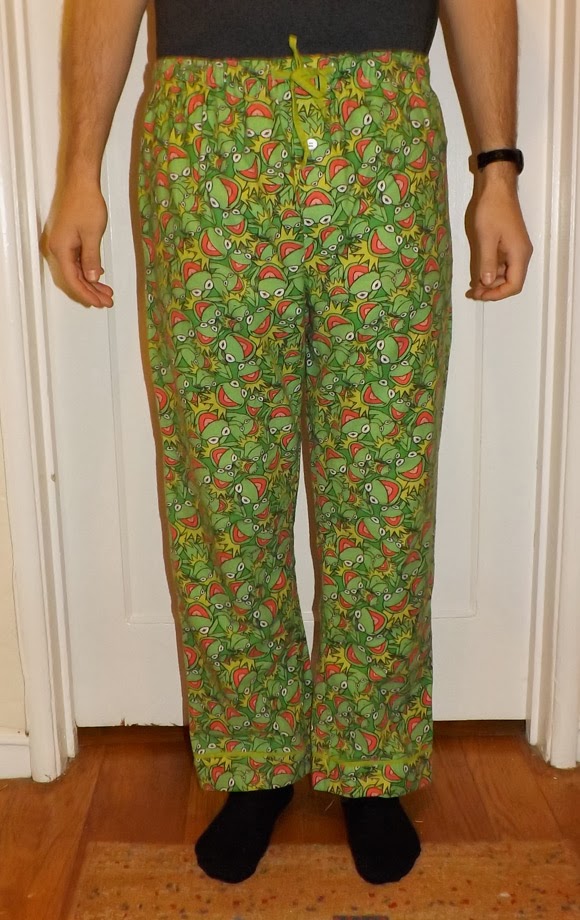 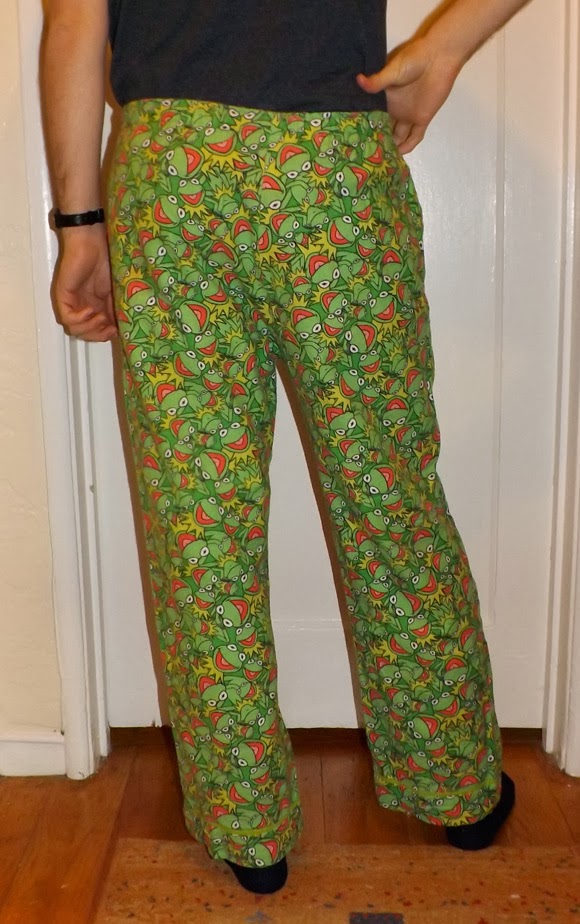 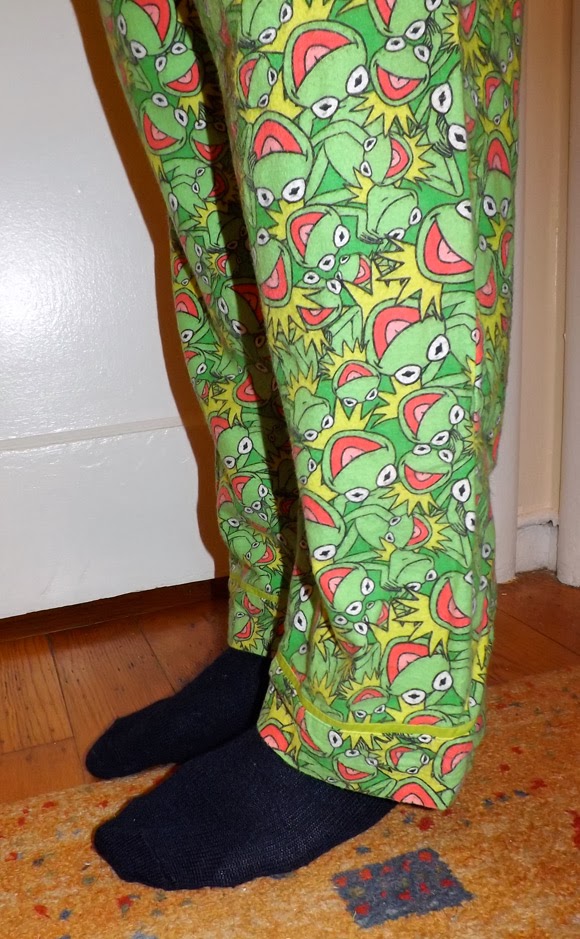 It's the holiday season and I'll be at several craft fairs this week. They're all open to the public and free to attend. If you're in the bay area, come stop by as I'll be surrounded by lots of awesome vendores. 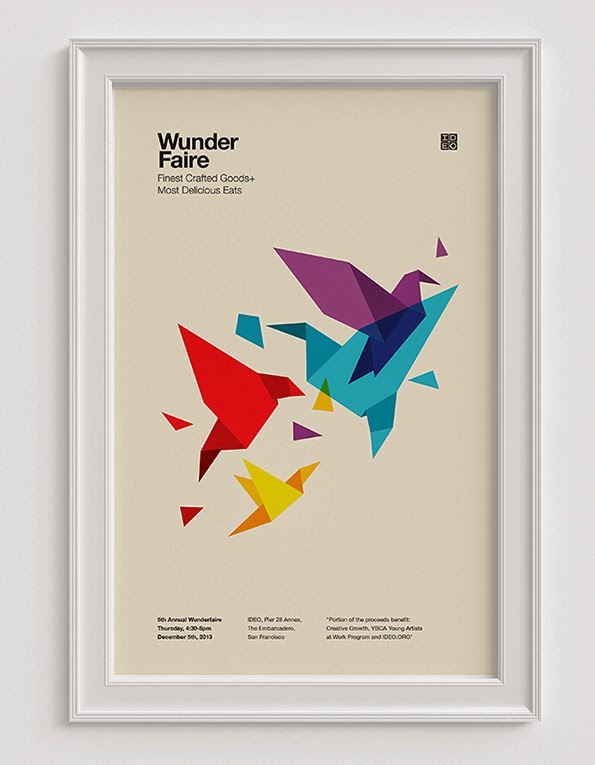 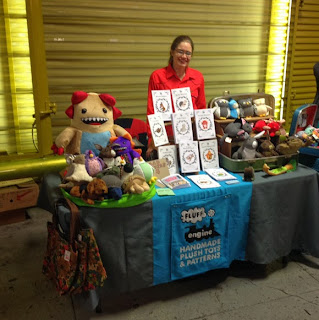 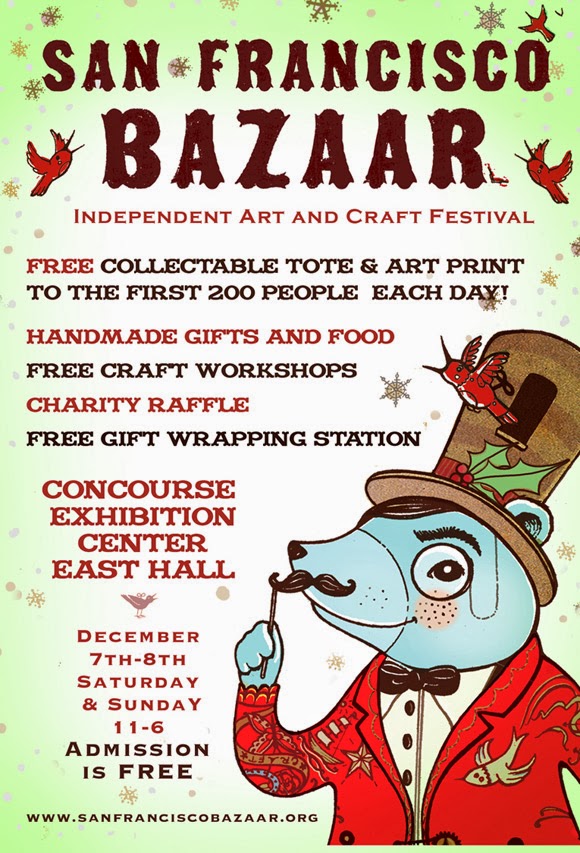 Posted by Claire Sanders at 11:14 AM 0 comments