I know the US Postal Service is facing major cutbacks and is transitioning to fit our now digital world.  As one fantasy solution, wouldn't it be cute if actual snails delivered the mail? 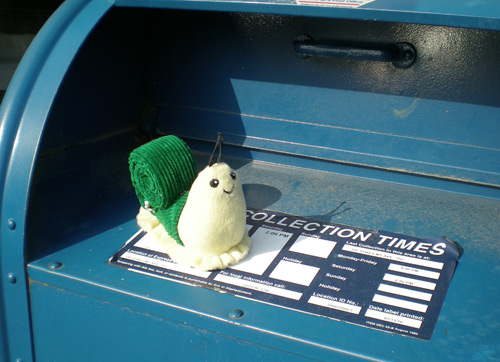 I whipped up a toy snail that shows how it could work.  Unroll the snail's shell to reveal a pocket in which to place your letter.  Once your letter is in,  roll the shell back up and secure with a snap. The snail slowly moves on its way to deliver your very important letter. 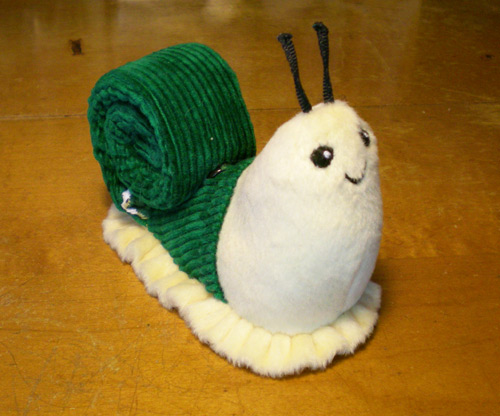 I'm planning on making some more snails in different color combinations, then putting them up for sale on etsy.
Posted by Claire Sanders at 8:32 AM 1 comments

I had a dream a couple of years ago about city wall space getting so sparse that people starting spraying graffiti on live pigeons.  It seemed like a crazy concept,  so I thought I might try to sculpt some pigeons and then paint graffiti pieces on them.

I have made different kinds of molds throughout the years,  but I wanted to try some potentially more environmentally friendly materials.  Silicon is a great molding material as it picks up excellent detail and cures very quickly.  The problem with silicon is that after you're finished using the mold,  it's gonna be around for a long time.  Looking up some options, liquid latex seemed like a good fit for what I wanted.  It's natural, coming from the rubber tree, it will eventually break down and it holds excellent detail.  It is mildly toxic as the liquid part contains ammonia.  Since it's so flexible,  an additional mother mold is needed to hold it in place. By using plaster to make the mother mold,  I'm still using a material that will naturally break down.

I sculpted a sleeping pigeon using Roma Plastilina #2 medium,  I've used this material with success before.  I like that you can use it over again since it's oil based and doesn't dry out.  I did have some problems creating details.  With the summer heat,  it stayed pretty soft at room temperature.  I was constantly sticking my sculpture in the freezer to cool it down so I could carve out more intricate details.  In the future, for small detailed items I'm going to try either #3 or #4 hardness or Castiline.

I purchased liquid latex through the Compleat Sculpter in New York.  It was really easy to apply the latex with a brush, but it is a slow process since you need to wait for each layer to dry.  It took about a day,  since I worked on other things as each layer dried. After 9 layers, the latex mold was complete and I was ready to make the supporting mother mold.


My sculpture has undercuts, so I had to make a 2-part mold mother.  I used more plastilina to divided the mold into two parts, then poured the first part in plaster.  After the plaster set (about 45 minutes),  I still waited about 2 hours for it to really set and dry.  Then I applied one coat of liquid latex to the finished plaster side so that the 2 parts of the mold wouldn't stick to each other.


I poured the second part of the mold, then waited a couple more hours for all the pieces to dry before pulling it apart.


I made a cast using more plaster.  Latex is pretty great because it doesn't stick to much, I was able to cast without a mold release agent. Maybe latex is too flexible, because I had some problems getting it to sit right in the mother.  In some ways,  it's awesome to play up the distortion factor you can get with latex, but that's not what I was looking for with this project.  After a couple wonky looking plaster pigeons,  I decided that I was too sloppy with the first mold and attempted another.  By making the pigeons out of biodegradable plaster,  I don't feel bad about throwing my mistakes away.


The second time I made a 4-part mother and was much more careful about dividing the mold into pieces and molding them with care.  I also made a rectangle box support to hold the mold while it cured.  The 4-part mold worked a lot better,  maybe because it was my second time doing it. 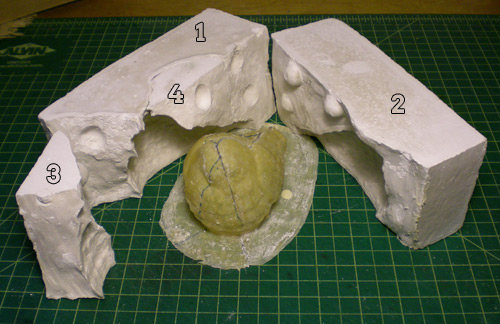 Once the mother mold had cured,  I cast a pigeon in plaster.  I painted the undercoat in grey gloss enamel spray paint (so much for environmentally friendly.)  Then I used paint markers to create the graffiti. 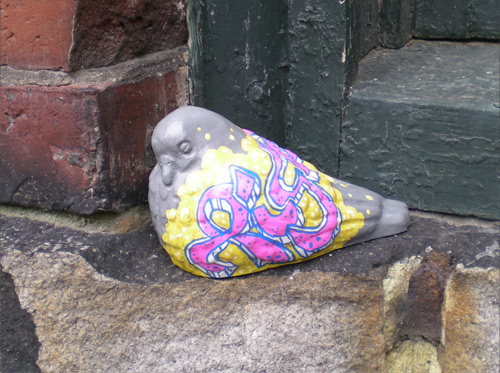 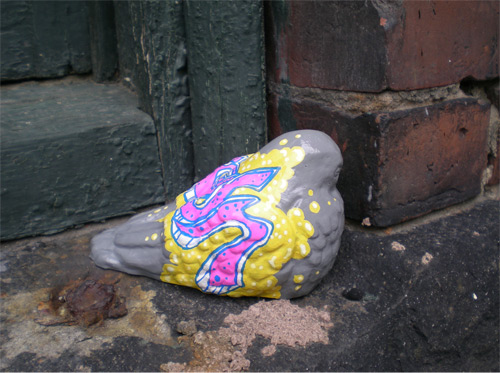 I'm happy with the result. It pretty much looks like the dream I had, except for the pigeons were still living in my dream, but I don't condone painting any living thing with spray paint.
Posted by Claire Sanders at 9:13 AM 1 comments