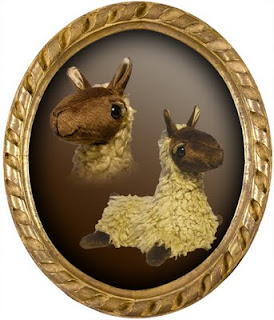 After getting some nice live feedback from people passing by my table at Stumptown, I've got to say that the Llama plush were, by far, the most popular. At the beginning of my design research, I checked out some llama toys in standing positions, but I really wanted to make one in a lying down pose. Instead of going with a natural pose of legs curled up underneath I designed them to be sprawled out. I like the way the floppy pose turned out, plus having the legs out make the pattern that much easier to assemble.
Here are some of the sketches I did while getting into the llama state of mind. 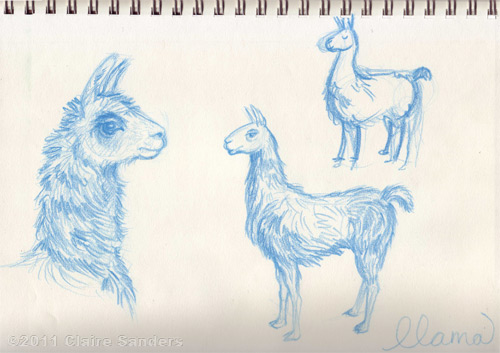 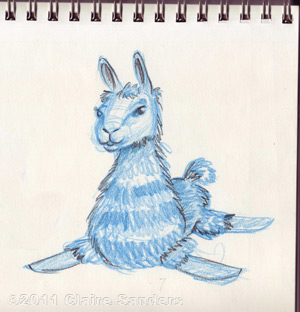 Make your own llamas with the pattern available in my store,
I also have a couple for sale on etsy.
Posted by Claire Sanders at 12:23 PM 1 comments

I made a bunch of plush animals from my patterns and they're available for sale in my etsy shop: fluff engine. There are all sorts of colors and textures to choose from, go check it out. 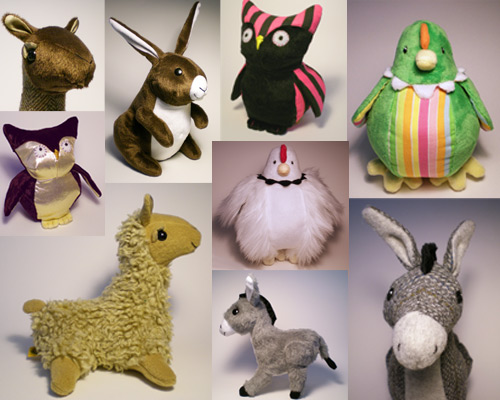 Posted by Claire Sanders at 7:52 AM 0 comments I had the honor of getting to make the 2011 Maisie Kukoc Award. The award is given right before the Stumptown Comics Fest to an awesome mini-comic creator.  It was presented at Guapo Comics in Portland. The winner, Damien Jay, wasn't able to be there, but he was called live and he was very surprised and a little confused to have a shop full of people calling him.

The award is named after John Porcellino's cat and he makes King-Cat comics so the crown and kitty combo basically designed itself.  Although the cat is curled up inside, it still can be worn as a crown. The crown is made out of gold lamé, with an internal fabric stiffener to keep the crown shape. The kitty is made of a low pile plush, I did all the embroidery by hand. It was fun trying some new hand embroidery fonts as I usually just do my handwriting.

There are more photos in my flickr.
Posted by Claire Sanders at 9:37 AM 0 comments

All these owls plus a bunch more plush animals are about to get on the train with me to start the journey to Portland, OR for the Stumptown Comics Fest. It's this weekend (April 16 & 17) and I'll be selling all my patterns and some plush I've made from them. I'll be right beside Alec who will have lots of awesome comics for sale. You should come stop by if you're in the area, it's always a fantastic overload of amazing talent and wonderful comics.
Posted by Claire Sanders at 7:20 AM 0 comments 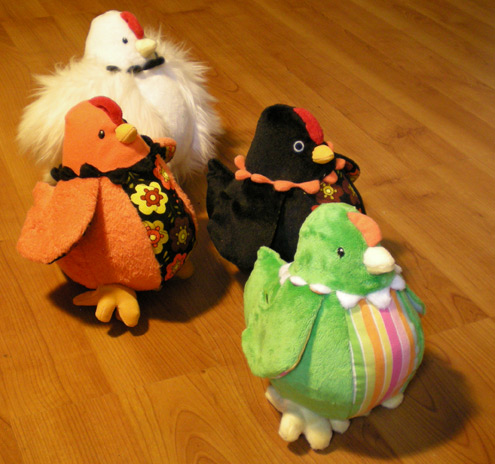 The second plush pattern I made is a chicken. I grew up with chickens so for the most part I think they're cute, but Alec really loves them. Perhaps because he has never seen them tear apart a centipede and gobble it up like it's the most delicious treat they've ever had. 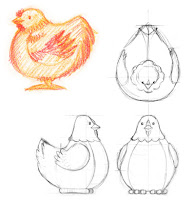 In my sketches for the hen I drew the wattle, but discarded it in the pattern process to make it cuter, just keeping the comb. The feet were the trickiest part, I made them big to make assembly a little easier but it was still difficult getting them to stay close to the body without the hen rolling over. One of the best things about a plush chicken is that they can be made is all sorts of colors and textures and you still know that it's a chicken. Then again I'll probably say that about anything, I just like bright colors reality notwithstanding.
Posted by Claire Sanders at 3:57 PM 1 comments

While I was in college I noticed a lot of dudes were growing beards. I guess from a puberty standpoint this makes sense, the super awkward years of high school are mostly over and you're coming to terms with being an "adult" and being a man, so why not grow a beard. Plus in college, for the most part, you feel like you can do whatever you want.
This still didn't make much sense to me, so I decided to make a mini documentary about it, or at least ask some dudes some questions about their beards and see what I learn. I focused on talking to young guys that were growing their first or close to first beard.

By making the documentary I did learn a decent amount about beards, mostly that guys thought they were cool and by having a beard it would make them cool. Or it was just out of laziness, which is also valid. I'm still not really into them. Now I'm with a dude who has a crazy huge beard, but at least it's for a good cause: art.
Posted by Claire Sanders at 8:58 AM 5 comments